The scientific name is a first generation it's a cross between the scarlet macaw and the buffon's macaw.

The distribution is it's a captive macaw and hard to find.

The description is the Verde Macaw, being a cross between a Buffon's Macaw and a Scarlet Macaw, is a very colorful hybrid. Though the father's have the dominant gene, which will influence their final appearance, both parents contributing to the striking colors of their offspring. Verde's are a full size Macaw and can learn tricks as well as mimic a few sounds of the human voice.

The size and weight is they are a full sized macaw weigh over 2 pounds and get up to 85 cm.

The care and breeding is needs a roomy cage, they need to be let out for extended time out to play on the pen to prevent boredness. They eat all kinds nutrition things like seeds, nuts, fruits and vegetables.

The social behavior is verde macaws socialize and bond closely with one person but do well in a family situation also. They are a typical macaw and can be cranky at times. To have a well rounded bird that enjoys more that one person, make sure it is well socialized with lots of folks.

The Breeding and reproduction is they don't generally bred but the hybrid macaws are breeding more often.

The potential problem is they can be noisy at times.

The availability is they are rare as to buying them, there are expensive. 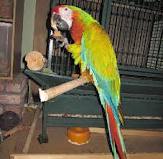 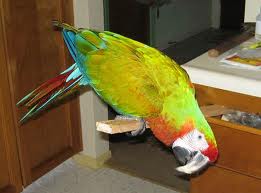 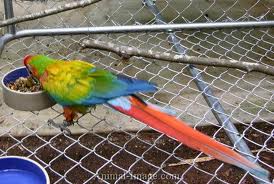