The scientific name is it's a second generation macaw it's a cross between miligold macaw and scarlet macaw.

The distribution it's a hybrid macaw hard to found which are rare.

The description is starlight Macaws are a very brightly colored macaw hybrid. Both parents contribute to the colors of their offspring, though the father's have the dominant gene and this will influence their final appearance. The Starlight Macaws have a Scarlet Macaw father and a Miligold mother, so are strongly influenced by the colors of the Scarlet.One of the Starlight's parents, the Miligold Macaw, brings strong greens and blues into the mix, an influence of both its Blue and Gold and Military Macaw parents. The bright reds on the forehead are also from the the Military, but can be strengthened even more by the addition of the other parent, the Scarlet Macaw. The Scarlet Macaw brings out a lot of bold reds, especially to the underparts. You can also see its influence in the coloration of the beak, being a whitish color rather than the black seen in the parent's of the Miligold. The Starlight Macaw gets a beautiful combination of colors from its parentage, making it one of the most impressive hybrid macaws. Starlight Macaws 's are a full size macaw. It is is highly intelligent and trainable. It can learn to talk with a general vocabulary of about 15 or more words and expressions.


The size and weight they get over 2 pounds and the length is up to 90 cm.

The care and breeding is they need a roomy cage, need to be let out for extended period of time to prevent boredness. Eats all fruits, nuts, seeds and vegetables all nutrition things.

Social behavior is the Starlight Macaw typically takes on a composite of traits from its parentage, having a sweet friendly nature, as well as being highly intelligent and curious. They can be a very good natured and intelligent pet bird that is trainable and can learn to talk. They are a typical macaw. Can be cranky at times and may even be a one person bird or only like men or women unless well socialized. To have a well rounded bird that enjoys more that one person, make sure it is well socialized with lots of folks.

The breeding and reproduction is they don't tent to bred but the hybrids are comming more common on breeding.


The potential problem is they are noisy at times.


The availability is they are rare, expensive and are available. 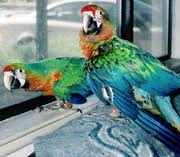