The natural habitat runs from eastern panama in central america south across northern south america east of andes to bolivia brazil and paraguay. It is an endangered species because it's on the list.
The green winged macaws are the most docile macaws often referred as a gentle giant, there are beautiful colorful birds.The bird is appreciated for both coloration and it's temperament, it is gentler, quieter, and a more affectionate macaw than its relatives. The green macaw is colored in rich, deep, red from it's head down through the upper mantle of the back and wings. Below the red running across the back and wings is a band of green. The green yields to the light blue on it's rump, the upper and lower tail converts. the tip of the tail to a dark blue on the wings.It is the 2nd size to the hyacinth macaw which is the largest macaw, both the birds a big, the green winged macaw averages a length of 35 1/2 compared to a hyacinth macaw at 37 cm the weight from 2.7 to 3.7 lbs so a one pound difference. The lifespan is up to 60 years.  The green winged macaw are confused with scarlet macaw because of the large amount of red in it's feathering. It had a board band of yellow feathers across the back rather than the green ones. The green winged macaws eat seeds, nuts, fruits, and vegetation in the treetops. They also eat wild in protein and love eating chicken. The winged macaw requires a roomy cage atleast 2 1/2 by 3 feet.It needs 2-3 hours out the cage, it needs daily clean of food and water. 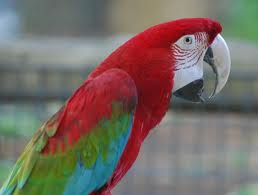 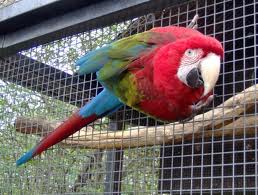 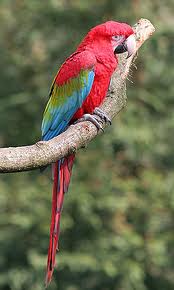