The scientific name is its a first generation macaw, it's a cross between the scarlet macaw and the green winged macaw.

The distribution is they are a captive bred hybrid macaw. Are rare to find.

The description is ruby macaws are exceedingly striking in coloration, and rank right up there among the most colorful of the Macaws. They are a full size Macaw and can learn to talk with a general vocabulary of about 15 or more words or expressions. A Ruby Macaw needs good socialization and a firm consistent hand in training, especially it matures.In the mating pair, the male has the dominate gene. Often times the overall coloration of the Ruby Macaw can be very similar to the Green-winged Macaw and they are often mistakenly thought to be a Green-winged Macaw. Coloration varies however, even in babies from the same clutch.
If the male parent is a green winged macaw.The offspring will generally have the same size body and head as the father. What distinguishes the Ruby from the Green-winged father is the center band of feathers. These feathers can be a mixture of varying amounts of yellows and oranges, and they can be edged with different shades of yellows and oranges. If the male parent is a scarlet macaw.The offspring will generally have the head and body size of a Scarlet. The amount and coloration of the facial feathers will also generally be more similar to those of the respective father. There is very little facial feathering on the offspring of a Scarlet father.

The size and weight is can get over 2 ponds and the size is between the scarlet and green winged macaw which is between 90 and 85 cm.

The care and breeding is a roomy cage is required unless the bird is to be let out for extended periods. Many birds can spend most of their time on a play pen or parrot perch. In the wild their parent species eat a variety of palm nuts, fruits, seeds, and possibly vegetable matter from the treetops. Provide them with a good parrot mix that includes formulated foods, seeds, nuts, and dried fruits. They will also enjoy fruits and vegetables.

Social behavior is they are a typical macaw. Can be cranky at times and may even be a one person bird or only like men or women unless well socialized with lots or folks.

Breeding and reproduction is they don't generally bred.

They have no sexual differences.

The potential problem is they can be noisy at times.

the availability is hard to find and fairly expensive. 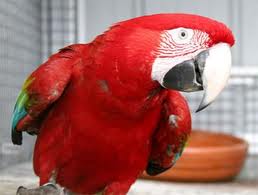