The scientific name is the shamrock macaw is a first generation bird. It is a cross between scarlet and military macaws.

The distribution it is a captive hybrid macaw. They are rarely found.

The description is shamrock Macaws are a very colorful hybrid Macaw. The combination of both parents contribute to the striking colors of their offspring, though the father's have the dominant gene and this will influence their final appearance. A Shamrock Macaw, being a cross between a Military and a Scarlet Macaw, has lots of fiery reds contrasting nicely with the Military greens.


The size and weight is full sized macaw that can get over 2 pounds and is around 80-90 cm tall.

The care and breeding is it needs a roomy cage, it needs to be let out for extended time on a pen to play so it doesn't get bored. It eats all nutrition food like fruits nuts seeds vegetables.

The social behavior is the shamrock macaws socialize and bond closely with one person but do well in a family situation also. They are a typical macaw, however. They can be cranky at times and may even be a one person bird or only like men or women unless well socialized.To have a well rounded bird that enjoys more than one person, make sure it is well socialized with lots of folks. Here are some very personable and intelligent Shamrock Macaws we've had the pleasure of working with

Female Shamrock macaw-Otono
Otono is a full size Macaw and has learned to speak several phrases including, hello, hello love, goodbye, pretty bird, and how are ya. Otono is a top quality pet bird, very handleable. She likes to go for walks. She likes to swing upside down while your are holding her by her feet. She is very curious and enjoys reading books with you (as long as you don't mind chewed books, and Otono feels everything with her tongue and gives kisses. Otono came to our store as an orphan looking for a good home since her owners couldn't keep her. When we got her we were told she was a "Shamrock Macaw" and that the parents were a Scarlet and a Greenwing macaw. Well, she is definitely a Shamrock but the parents are actually a Scarlet Macaw and a Military Macaw.

Male Shamrock Macaw-Vincent
Vincent came to our store as a young 'not quite weaned' baby. We finished his weaning and really fell in love with him. This fellow has a really sweet personality! Vincent's parents were also a Scarlet Macaw and a Military Macaw Vincent turned out to be a male DNA sex. He was born in May of 1996, so in his picture he is less than a year old. Vincent's colors will continue to get much brighter as he gets older.
After a bit of investigation, we found out that Otono (seen on the right above) is actually a sibling to Vincent. Otono, born in May of 1995, is about one year older than Vincent.

Breeding and reproduction this is a hybrid and it use to be that they were generally not bred, however the breeding of hybrids is becoming more common. The Shamrock Macaw has been bred for a number of years and is one of the most common hybrid macaws found today. Some second generation hybrids are also now being produced, where the Shamrock Macaw is crossed with other first generation or other second generation macaws. These include the Shamrock x Scarlet Macaw and the Harlequin and shamrock macaws. Currently there are no common names for these hybrid macaws.

The potential problem is they are noisy at times.

The availability is the Shamrock Macaw is a popular hybrid that has been successfully bred for many years. It is one of the most common first generation hybrid macaws seen today. Finding these beautiful macaws for sale is easier than some of the less commonly bred hybrids. 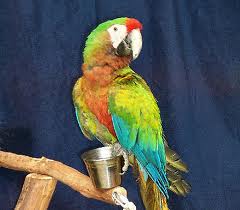 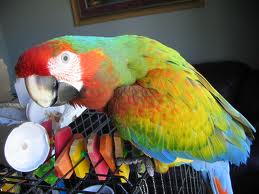 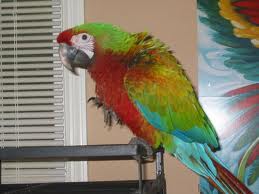