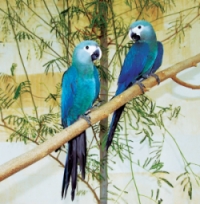 The spix's macaw are one of worlds endangered species, they are representative genus cyanopsitta. The spix's macaw is 55 cm long, They weight is the male one are .39kg and the femmales are lighter .33kg. The spix's macaw are found in buriti palms of southern piaui and northern western bahia. The spix's macaw are usually found in the caraiba trees in which they depend on. The spix's macaw feeds on seeds and fruits with flavored cooked pasta fruits and vegetables, nuts, seeds, hot peppers and cooked beans. The young spix macaws of reproduction start in september at the age of 4.
The loss of much caraiba woodland the impact of settlers moving through its habitat has caused the Spix's Macaw to be one of the most endangered birds today. The illegal trade of spix's macaw had effected the population. There are only one wild male and introduced female with 30 capacity. 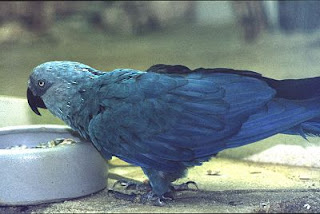