The buffon macaw is know as a ara ambiguus, there are listed in the iucn which are red list threatened species as an endangered. They reach 33 to 36 inches in length and weighs up to 2.9 pounds. They are describe in the 1811, their are 2 subspecies which are

Ara ambiguus this is the nominate species. It is found in the northern regions, in the honduras through the columbia. The common names are Buffon's macaw, great green macaw and grand military macaw.

The buffons macaw are reserved natural disappeared completely from areas of human population. They live on high tree tops, forests in tropical and subtropical zones. The buffon's are lonely birds they tend to leave in groups. The buffon macaw has the same appearance as the military macaw, they are very slight size and color differences.
The buffon macaw is green with pale blue on lower back, the tail is pale brownish red, tipped with blue, the forehead is red, the bare facial is white with a pink cast, the legs are gray, the beak is gray, and the eye is dull yellow.
The buffon macaw eats seeds, nuts, fruits, berries and plants they like to eat with there family they love eating chicken, with protein in the wild. The large macaw require 2 1/2 to 3 feet , they also need 2-3 hours a day outside the cage. The macaws needs daily clean of water and food, in the wild they are seen in groups, up to a dozen, they are intelligent lovable and friendly, there are sometimes loud because of the interactions with one person. The buffons adapt quickly, once they accustomed to a new environment they tend to start training.
There is no difference between male and female because they are alike, they clutch egges 2 to 4 incubate in 26 days. The babies will leave there nest in 84 days. 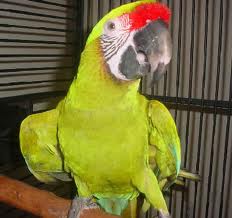 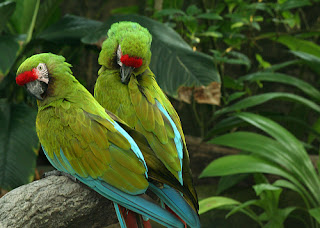 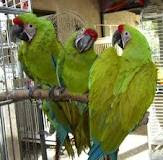