The military macaw are the most intelligent birds that are called by the biologists in the flying primates, the world specializes 8 large macaws. The genus species of the military macaw is ara militaris. The range of the military macaw is mexico to argentina. There natural habitat is dry forest and open woodland, in pairs of of small flocks up to 20 birds. The physical appearance is olive green with a red forehead. uppertail converts the rump blue, The cheeks of the small rows of violet brown feathers. Eyes yellow the beak dark gray, an the legs light gray. The female is slightly smaller, young resemble of their parents but they are duller with brownish tinge. The female lays 2-3 eggs, the incubation is 28 days. After 3 months they leave there eggs, and they are endangered species. 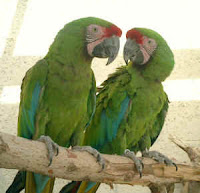 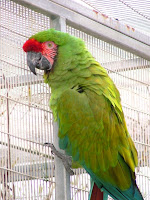