The scientific name for the hyacinth macaw is the Anodorhynchus hyacinthinus, Its orgin is from south america. The hyacinth is 40 inches in length from the beak to the tip of the tail and weighs at 2-3 pounds. The hyacinth can live up to 60 years of lifespan, the hyacinth is known as gentle giants the Hyacinths are very affectionate birds by nature. They are easily trained and tend to bond strongly with their human caregivers. The hyacinth have 4 feet wingspan they must be given adequate time to exercise and room for a good stretch. It is a good idea to give a Hyacinth a minimum of 1-2 hours of time on a playgym or other safe area per day to maintain their muscles. Hyacinth's also need to chew to maintain their beak and jaws, so plenty of chewable toys are a must for these big beautiful birds. birds demand more time and attention than other species, Hyacinth Macaws are definitely not the right pets for just anybody. Large, beautiful, and intelligent, they can be quite alluring -- but resist the temptation to bring a Hyacinth home without thoroughly thinking it through! A Hyacinth Macaw's beak can snap metal, which means that they must be taught at an early age not to "mouth" their human caregivers -- no matter how gently. Thankfully, they are usually quite docile and easygoing, and seem to enjoy learning and human companionship. Another issue that arises from a Hyacinth's strong beak is that of adequate housing. Many Hyacinth owners have been surprised to find that their birds can reduce a regular cage to splinters! The best bet for a Hyacinth is a cage made of stainless steel.
These big birds need plenty of room to exercise and play, as well as plenty of supervision to make sure they do not get into anything dangerous. Do not buy a Hyacinth Macaw is you don't have time to spend with it -- but if time is not an issue, a Hyacinth can quickly become your best friend. Hyacinths have been called the most friendly of the Macaws, and in general, they do seem to take more of an interest in humans than certain other species. If you have the time, finances, and space to devote to a Hyacinth Macaw, you may just find that these bright blue beauties are the birds of your dreams. Hyacinth macaw is parrot native to central and eastern south america.The hyacinth is longer than any other species of the parrot. The hyacinth is the largest macaw and the biggest flying bird from kakapo of new zealand. The habitat loss and trapping wild birds for the pet trade on a heavy toll on their population in the wild, and as a result the species is classified as endangered.The tail are long and pointed, basically the color of the hyacinth is blue lighter above and darker on the wings. The hyacinth has black curved beak, It has a lappet of bright-yellow bare skin on the left and right of its face adjacent to the base of its lower beak and an eyering of yellow bare skin encircle each eye. Male and female are identical in external appearance, and juveniles resemble adults except they have shorter tails and the yellow on their faces is paler. The majority of the hyacinth macaw diet is nuts from native palms, such as acuri and bocaiuva palms. They have a very strong beak for eating the kernels of hard nuts and seeds. Their strong beaks are even able to crack coconuts, the large brazil nut pods and macadamian nuts.Nesting takes place between July and December, nests are constructed in tree cavities or cliff faces depending on the habitat. 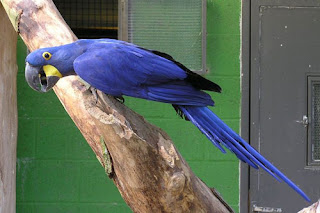 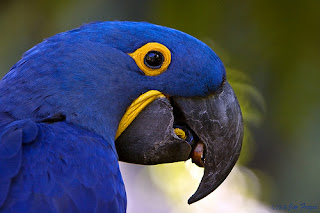